The Continuous Integration and Testing Conference, abbreviated as CITCON, is an OpenSpace non-profit conference which for ten years has been organized in various cities around the globe. Currently, each year there are four editions taking place on four continents: Europe, America, Asia and Australia & New Zealand. The previous editions in Europe took place in London, Brussels, Amsterdam, Paris, London again, Budapest, Turin, Zagreb, Helsinki, and this year in Cluj-Napoca.

The organizers of the conference are Jeffrey Fredrick and Paul Julius who are very passionate about their work and happy to share their long professional experience. The participants at the conference are people who work in a continuous integration / continuous delivery context (CI / CD) and not only. This includes any kind of associated roles, from testers, programmers, devops to managers etc. One thing though that is good to have in mind is that the attendees need to be familiar enough with CI / CD, such as to be able to share their experiences and challenges, because as I mentioned before CITCON is an OpenSpace conference. This means that the participants are the ones who make the conference.

I’ve been attending this conference for 5 years now, and haven’t missed a European edition since my first. I loved so much what the OpenSpace format comes with, the variety of people’s skills and work contexts, the interactions between attendees, the freedom to do whatever fits best our learning objectives, that I wanted to bring it closer to the software community in my town. That’s how I got to be a volunteer in organizing CITCON in Cluj-Napoca this year.

This blog post is dedicated to people who want to host Citcon in their town. I will lay down my vision, challenges, and what I learned, hoping that it can make your journey smoother.

My tasks were to find a venue, to promote the event and potentially to look for sponsors, as CITCON is a non-profit organization and attendees have the option to ‘buy’ free of charge tickets.

One of my biggest surprises as a volunteer, and it was a very pleasant one, was that people came towards me to help, instead of me going towards them and ask for help. It felt great! That’s how Monica Ratiu hopped in the team, then Ioana Chiorean, Paul Damian, Alex Rotaru, and even Peter Zsoldos from 460 kilometers away.

The challenge of finding a venue

One of the biggest challenges was to find a suitable venue and if possible free of charge. The setup of the conference consists of 5 rooms, among which a large room with a capacity of about 120 people and 4 other rooms with a smaller variable capacity. After doing some research I found out that there are not many places in Cluj that fit in this description. On top of that, I was holding on tightly on two things: having the large room in a circle setup, and not having it hosted at a company’s office. Why? Because I observed that a circle setup is an important enabler for strong interactions, as we’re able to see people’s faces when they’re talking. The company thing was just a worry of mine of not turning the conference into a recruiting event. So, I got in touch with universities, high-schools, co-working spaces, hotels, a ‘technology park’, event spaces, even museums and a tea-house, but none of them seemed to have the features we needed, and if they did have they were unfortunately unavailable during the required time frame.

After a while of searching and not finding a venue to book, I loosened my requirements and approached companies. To my surprise though, the three companies I talked with were not able to host the conference either because of rooms layout, security or the persons in charge being in vacation.

I didn’t know how to proceed next. Looking retrospectively, there were two things that helped me in this situation:

Finally, we found the venue we were looking for, but I had to overcome a mental barrier to reach to it. I haven’t realized but very late that I got stuck on looking only for places that were free of charge or within a previous budget. This venue costs were twice the amount I had in mind. But it was worthed, many people had very good feedback related to it.

After all, even if double compared to the previous years, the event costs were not that big given the overall costs of the conference. It turns out that even if the location price was higher, the food was much more cheaper than usual and that compensated. After doing some calculations the price of both the location and the food was less expensive than what it usually costs only the food. So this was quite a good deal.

Now the story behind. We were still looking for a venue. We reached to this final one, Impact Hub, I asked for an offer and received an email with the venue costs and catering services. Personally, I totally dismissed the catering information as I was too focused to sort out the venue first. Luckily, when I set out to communicate the venue information further on to the organizers, I had difficulties in writing them an email in a neutral tone. And that bugged me. So, after writing and rewriting I finally decided: what if I just translated the email from Romanian to English? And that’s the story how the catering information succeeded to reach to the organizers: by sending them the whole text unaltered (besides the language translation). Of course that the response I received was totally unexpected: the organizers were happy with the deal. And if it wasn’t for the catering information I ain’t sure if it would have been that easy to decide having the conference hosted at Impact Hub.

It’s interesting how one small detail that I thought of not being important at that time, turned out to actually be very important. I wonder how often I communicated my interpretations leaving aside ‘minor’ details that perhaps would have changed the whole perspective upon the course of actions.

The conference from a volunteer’s perspective

Still, I can’t say I was all the time totally relaxed. The first part of the day I felt in a hurry, constantly having something on the top of my head that I wanted to check upon. Things got better in the second part of the day. Starting with lunch I had a very pleasant conversation with a new friend, then attended Squirrel’s session about TDD for people, followed by my session on Pigs VS Chickens, and afterwards a very productive one-to-one walk in the sun while talking about specification by example.

My learning focus during this CITCON was communication and action science topics. Also, Douglas Squirrel managed to print out a very beautiful pamphlet containing a conversation that he and I had last year about helping a colleague to change. The squirrel and owl are the main characters. I’m the owl. Check it our here: http://douglassquirrel.s3.amazonaws.com/actionscience/douglas-squirrel-booklet-A5-6-C.pdf.

It will all workout itself out, A-Ha!

The motto of this self-organizing conference is “It will all workout itself out”. When I first heard this, one day before the conference started, I thought it was a wise technique to calm down the mind in harsh situations. Then I heard it again during the day of the conference. My second time reaction was a bit dismissive, “Yes, I already know that from yesterday”.  And then I heard it again. And again, especially from the organizers in different situations during the event. Later that day I had the feeling that I finally understood what they meant, not only with my mind, but also within my body, and I was able to apply those words of wisdom. That was my A-Ha moment.

Some of the other people’s A-Ha moments that I liked are:

Conclusion. Oh no, the blog post is close to an end! 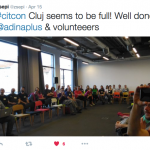 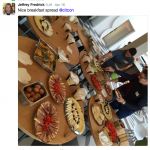 There are some things that I could have done better though. There are always things that we can do better, and one of them is to have used the CITCON mailing list more often. The benefits of cc-ing citcon@yahoogroups.com in the regular planning emails may result in more sponsorship applications, or more delegates coming from different countries, backgrounds and roles. So if you plan to volunteer for the next CITCON please remember to do that.

Good luck and looking forward to hear from you and how things went.