CITCON 2016 in Cluj-Napoca was the first CITCON I have ever attended and definitely not the last one. On the first day, at the opening, the organizers, Jeff and PJ explained the open-space format of the conference. Then, all of us had to introduce ourselves and share our major interest. I was really nervous taking the microphone and introduce myself in front of all those people. Later, I got to meet most of them and realized that there is no reason to be nervous as we all had the same purpose there: to learn!

After the introductions, each of us has had the opportunity to propose topics for discussions for the next day. I was impressed by how many proposals gathered and how many people came in front and presented their ideas and interests. I realized that I was surrounded by so many enthusiasts, learners, and great minds.

The first day ended with voting the proposals, a nice dinner with drinks and socializing. 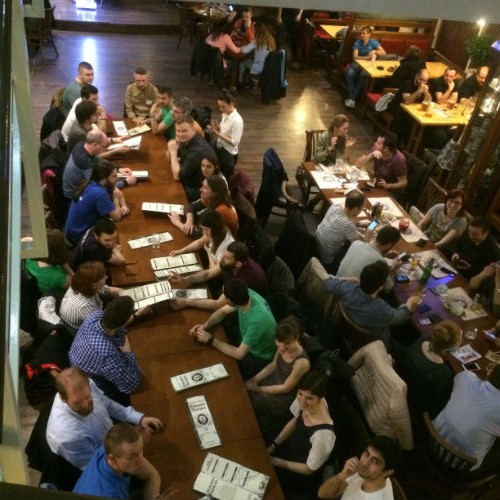 The next day came with the schedule and the learning sessions. From technical ideas to more soft skills related proposals, you could find anything that you wanted to discuss/learn about: DevOps, ChatOps, how to make CI more fun, learning mindsets, pair programming, specification by example, self-organizing teams, how to test your organization, become better communicators, talking about frustrations, building communities, how to report test automation status to non-technical people, speeding up automation with angular and javascript apps and so on.

People were so dynamic in changing the schedule that you had to re-verify it even 10 seconds before the session would start, otherwise, you risked to miss something of your interest. For me, this shows how eager the participants were to get to all the sessions they were curious about.

The first session I went to was about self-organizing teams. One of the attendees shared the problem that he and his team have in the company they currently work for. They were having a hard time understanding the decisions their managers made. Also, the reason why their way of organizing, prioritizing and solving tasks were not approved. We were discussing their current workflow, the tasks they had and the deadlines they received. We discussed how they raised this concern to the management and what reply they got. What I learned from this session is how important it is to agree together the terms and the deadlines and what you can do until the deadlines. Also, how important it is to give visibility of your work to the other teams or other colleagues of yours.

If you want to become a self-organizing team, it’s important to gain the trust of the stakeholders, developers, managers and other people from your company. In order to achieve this, you have to make sure that they are aware of what you did, what is work in progress, what is blocking you, what is done and so on. But, also, it is important for your company to be transparent in decisions and that you understand the importance and the reasons behind these.

The next session I attended was Jeff Fredrick’s one about frustration. He invited people to voluntarily talk about their frustrations while he asked questions in order to help the volunteer understand better where this frustration comes from and how to overcome it. There were 3 volunteers (at least while I was at that session) talking about frustrations at work but also from personal life. Jeff calmly listened to their stories and tried to find relevant questions to ask, recreating the situations that the volunteers described or even creating new situations while role-playing.

Some of the attendees got involved and tried to come up with solutions for the presented frustrations. It was nice to see that people were trying to be helpful, but the point of Jeff’s session was to learn to question your problem for a better understanding and to try to avoid finding solutions for the first interpretation.

From ‘Thinking Fast and Slow’ (Daniel Kahneman) I learned that, when dealing with frustration, your brain will try to find the simplest story as an explanation, a story that can be coherent to you. This will ignore all the evidence which can contradict the story you imagine.

What I think Jeff tried to do in this session was to help us learn how to overcome this behavior of our brain and try to see all the evidence before finding a ‘coherent’ explanation for our frustration.

This is why we exercised a technique called coherence busting. Jeff asked the participants to come up with possible reasons regarding these frustrations. At first, everyone came up with what they found as the most logical arguments, but when Jeff told us to try to find illogical solutions, everyone became really creative and energetic. The purpose of the exercise was to try to get past the ‘coherent’ story the brain created, to see that there could be a lot of other explanations/reasons for your frustration and to try to get to the bottom of it.

After lunch, we continued with a session hosted by Adina and Douglas Squirrel about improving our communication skills. Squirrel presented us The Ladder of Inference, which is a good model for communicating better.

We often observe something that bothers us and we take actions regarding our interpretation of what we observed. The people that are involved cannot know what is our interpretation and why did we choose to act in a specific way because they don’t know the process inside our brain when taking a certain decision. 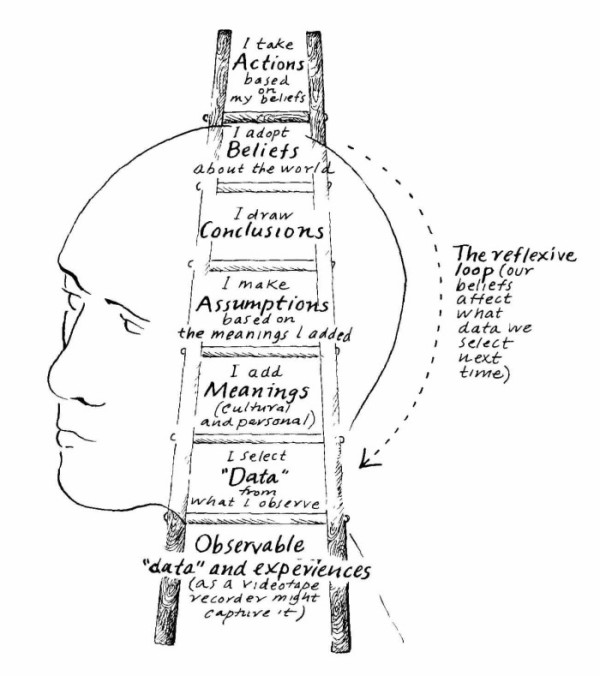 This model can help us find out more information about the behavior we see and also to discover how to act about it.

During the session, Squirrel practiced with volunteers communicating all the steps from the ladder. People came up with real-life situations when they had a hard time communicating to a specific person something that bothered them. Squirrel asked what was their first observation and their final action – the first and the last step from the ladder. Then he gave an example of how to go through these steps acting from the volunteers’ point of view, asking them to play the other part from their story:

At every step, Squirrel selected what he have found relevant from the previous step and asked the interlocutor about it.

Then the volunteers switched roles with Squirrel and found out new information about the observed data, which made them change their final action.

Further on, I participated at “Testing your organization” held by Andy Parker, where we listed some questions to ask in your company or a new project. I attended the “Mentoring and Coaching” session, where we started with defining the two terms. Then, some people shared their experience while others were curious where and how they can find their mentors.

I also tested the “Law of two feet”, as I was curious about more sessions that were in parallel or because the context of the discussion was not in the area of my interest.

And finally, before the closing session, I stopped by at the end of  Alex’s session on Building Communities. I was impressed by how passionate the people engaged in the conversation were about this subject. This session got me thinking: if there were no communities, no passion to share, we wouldn’t have all these great conferences and events to attend to. All these things are happening because of the love and ambition of communities. I realized that we are so lucky because, thanks to those people, we have the constant opportunity to learn and to grow.

My conclusion on this session made me realize that I want to be more involved in this ‘community’ of dedicated people organizing these great gatherings. I want to help creating opportunities for learning for those who share my enthusiasm for testing. 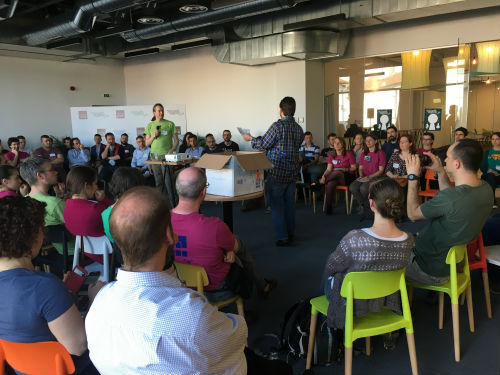 So, I take this as a resolution and I encourage you to do it as well!