1) Our job is to not be fooled

When something feels strange, I’d better not ignore it but instead verbalize it, even if I particularly have a “special thing” related to that. I’ll explain. During an exercise with James I felt something was weird: I was given to hold in my hands something very warm. But I thought “Hey, I usually have cold hands, so my senses must be exaggerate, the temperature surely is at normal parameters”. The result was that I dismissed my feelings without even giving them a chance. Well, it appeared that in this case the temperature was actually a hint for something that would have been important to question, as it was the key of the exercise. Analyzing this, I can’t blame myself too much that my past experiences influenced my thinking, as most of the times I was right not to rely on my body temperature sensors. The twist however, is that besides the temperature there were at least two other hints, unrelated to temperature which I dismissed as well. Just like the promotional offers: if you buy the big toothpaste, within the same price you also get a toothbrush. The same happened to me, only that with dismissing hints 🙂

I was fooled. This kind of things happen, and are part of our human nature. Only that the projects we work on would benefit a lot if we could minimize the frequency of being fooled. James put it this way: if even the tester in the project doesn’t get to investigate “the weird”, what are the odds that someone else will? Our job is not to get fooled, and improve the skills to minimize that to happen.

2) Get rid of hesitations in our speech

A few years ago I learned that strategies are not ultimate but rule of thumbs (heuristics), that there are many unknowns, that black swans are not impossible, and that we make assumptions sometimes without even being aware. Since then my perspective shifted to a mindset where certainty became a myth and anything is possible at any time. This had effects on my speech as well. Of course, this is not the only cause that lead to uncertainty in my speech, but had strong influences.

In this course, James’ point of view was to try to get rid of hesitations in our speech. “But”, I thought, “how can I get rid of them if I’m not sure if what I say is applicable? What if a black swan pops in? Maybe if I am unsure, it’s good to transmit that through my speech.” After thinking a while about this I realized that one can be confident in his speech and at the same time talk with confidence about the risks and possibilities of unknown. Hesitations in speech can easily transmit the message “Don’t trust me nor my testing”, when in fact what I, at least, want to transmit is that “I can’t tell you that the product will behave excellently in any possible situation, because I can’t predict any possible situation unless I become a witch with a magic globe. I covered all the scenarios that I thought relevant, here’s what I covered, what I haven’t and why. These are the risks that I see…” And so, I can be confident with saying that, even if I’m not confident on the whole product because of the tests I did not run, information I may have missed, or black swans. Confidence in speech and confidence in the product are not necessarily directly related and can be treated as separate. 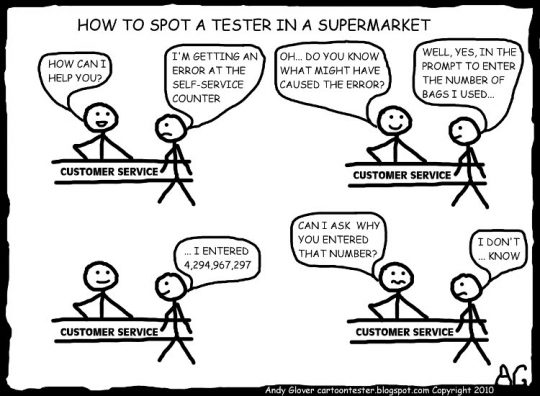 However, I think that James’ intention, was not to advise to be confident when we don’t have arguments. Also, ideally it would be nice of people not to dismiss someone’s ideas only due to lack of confidence in their speech, and try to understand the relevancy of the arguments. Unfortunately, it is not easy to do that in every single situation. Each one of us have our moments when we are in a hurry, feel time pressure, did not drink our morning coffee yet, etc. Therefore getting rid of hesitations in our speech when we have arguments is most of the times in our area of control, which helps a great deal to communicate efficiently and build trust.

3) Try harder not to misuse words. They confuse people who don’t practice our job

I was happy to see alternatives to some words I misused, e.g

What I also loved in this course

There were many other things I loved in this course. From James’ vision to encourage choosing, reasoning, being responsible, to the importance of managing stress or being aware that confusion when starting a new project is totally normal. Also the analogies used in this course I found very good. I’ll share some below.

The RST course was a great experience for me, I learned many and acknowledged even more. James is a great storyteller and a very thorough tester. I like that he’s aware of models he uses when he tests, and shares them in ways that are easy to follow and understand. I think that reflecting on the models we use is important, because the models that are in our head control our testing. Perhaps model is not an easy to grasp word, James offered an alternative for it: learning : ). At the end of this blog post, I’d like to share my favorite quote from the course “To be a good tester you need to be an ArTist of your own mind”.